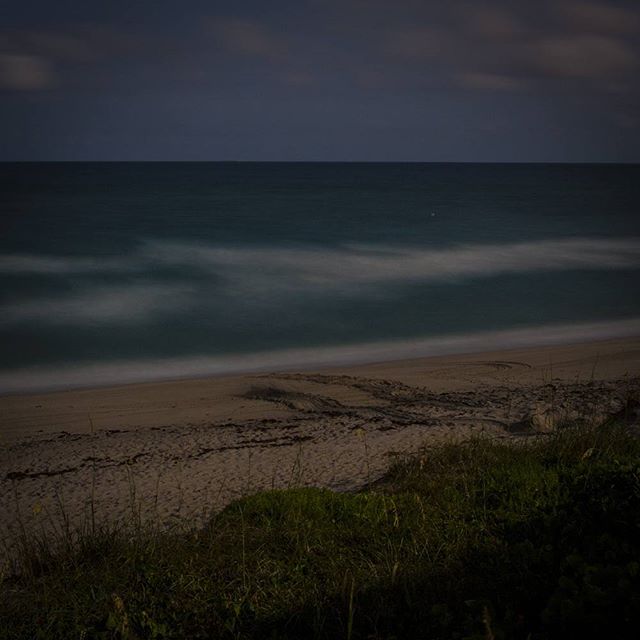 We’re just wrapping up a fantastic night. The conditions were just about as perfect as they could be. The moon was full which illuminated the beach and the tide was extremely low which made for great driving conditions. We had some colleagues from USGS joining us for the night and the turtles did not disappoint! In addition to our regular survey area, we are conducting monitoring for a nourishment project occurring in Boca Raton and one of our volunteers is also working north of us for another nourishment project at Bathtub Beach. Not only did we have 4 leatherbacks on our regular survey route, but each of the nourishment monitors found a turtle as well! So we ended up with 6 turtles on 3 different beaches spanning over 60 miles apart. The night started with a new turtle that one of our guests named Agatha and then we found a turtle that was tagged back in 2012. She emerged at a public beach and had a run-in with a lifeguard tower before deciding it wasn’t the right spot for her. She left without nesting after about an hour of trying to find a spot. Typically, when a leatherback spends this much time on the beach without nesting, she won’t return within the same night. So we’ll be keeping an eye out for her tomorrow.  The next turtle was quite familiar to us since we’ve spent the last 3 nights trying to help her out. She is missing her right rear flipper and we know her track quite well because it’s so unique. She’s been nesting on these beaches for almost 10 years and we’ve often helped her dig. For the last three nights, she has emerged on a newly nourished stretch of beach and despite our best attempts to help her dig a proper egg chamber (since she’s missing her rear flipper), she hasn’t been able to nest successfully. The sand collapses easily and her unique digging style just isn’t compatible with the sand. Thankfully tonight we were able to help her dig a successful chamber and she nested at around 3:00am. We spent a lot of time with her trying to ensure that she didn’t have to struggle for a 4th night. Sadly, while helping her out, we missed another turtle. We hate that! The final turtle on our survey was Estrella, a turtle we tagged two years ago that we’ve now encountered 3 times this season. The surveyor monitoring the Bathtub Beach nourishment project found a turtle tagged in 2005 that has been observed regularly on Hutchinson Island. While Hutchinson Island was not historically one of our normal routes, we’ve had numerous opportunistic encounters over the years due to various nourishment projects. The final turtle of the night was found in Boca Raton. Interestingly, she was originally tagged back in 2012 by the same surveyor working the Bathtub Beach nourishment project. In addition to 6 leatherbacks, there were several loggerheads on the beach tonight. Overall, it was pretty much a perfect night!