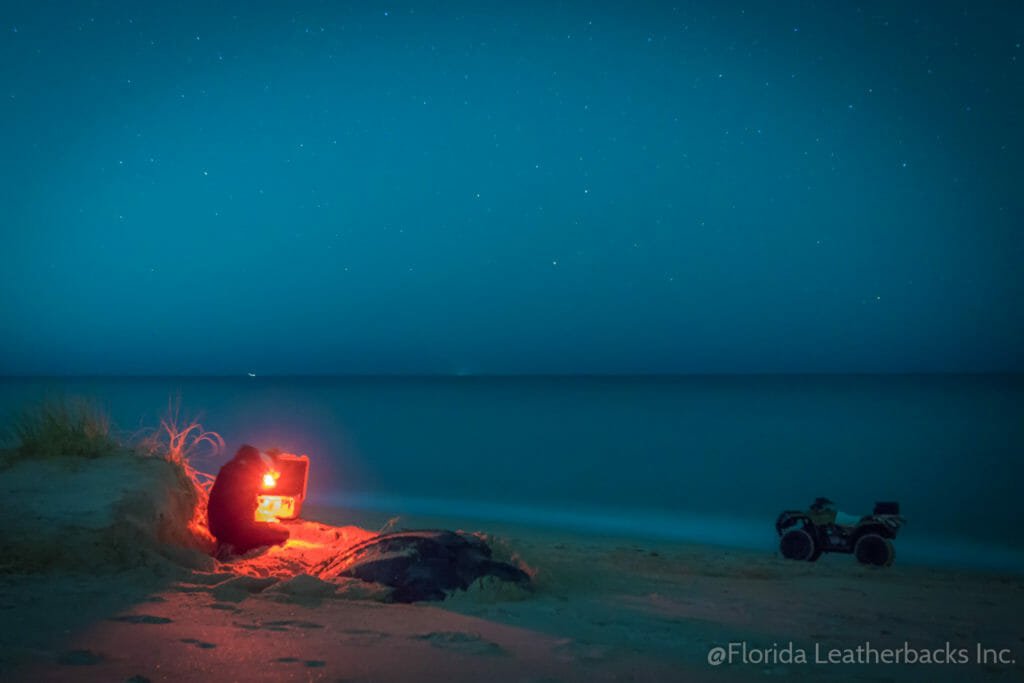 It’s the beginning of the 2018 nesting season and the girls are here! We’ve been anxiously awaiting the start of this nesting season after several low years in a row. Nest numbers have dropped for unknown reasons around Florida since about 2014. However, we’re hopeful that it is just temporary and things will pick up again. We have been conducting long-term monitoring of nesting leatherbacks in southeast Florida for many years. This research is designed to answer many questions about this important population by tagging and monitoring each individual we encounter. We develop a history with each and every turtle we encounter and remember them as they return throughout the years. We love getting a mix of new, untagged turtles and those that have continued to come back over the years.

The season started off well when, for the first time ever, we were able to tag a turtle in February. We are working with Ecological Associates Inc., an environmental consultant in Martin County, as they conduct permit-required monitoring on the northern stretch of our survey area. Their staff, who happen to be former volunteers of FLI, came across the turtle in late February and named her Rosa via a Facebook suggestion. Rosa was named after Rosa Parks, for being a leader and starting off our 2018 research season. Surprisingly, we’ve seen Rosa an additional two times already this season. Our team has observed as many as nine nests from a single leatherback. Could this early bird lay ten? We hope so!

That team encountered another new turtle just two nights later and named her Callie Rae. After that, we started to get some of the old girls back. The next few turtles had been tagged in previous seasons. On St. Patrick’s Day, the luck of the Irish brought us two previously tagged turtles. One of those turtles was not in our system. We asked around and found that she had been tagged in 2011 by the University of Central Florida in the Archie Carr National Wildlife Refuge and had not been seen since. We’re glad she finally made an appearance again. We decided to name her Fran after a dear friend of some of our volunteers who recently passed away. She had a true love for sea turtles.

We also observed a turtle originally tagged in 2007 that also nested in 2010 and 2012 but has not been seen in six years. We’re always curious if they are taking a long break or if they’re nesting on other beaches that we’re not able to observe. Another previously tagged turtle was observed in 2008, 2014, and 2016. This week we found Hunter, a turtle tagged by our team in 2014, as well as another new turtle. This new turtle was a big girl at 165cm. Several years ago we had talked about naming leatherbacks after popular female singers (we run out of ideas after over 700 names!).  We had tossed around the name Benatar (for Pat Benatar). We thought that “running with the shadows of the night” was fitting for the work we’re doing! We always said that the name should go to a big, strong turtle. Well this new turtle fit that description so she is now known as Benatar.